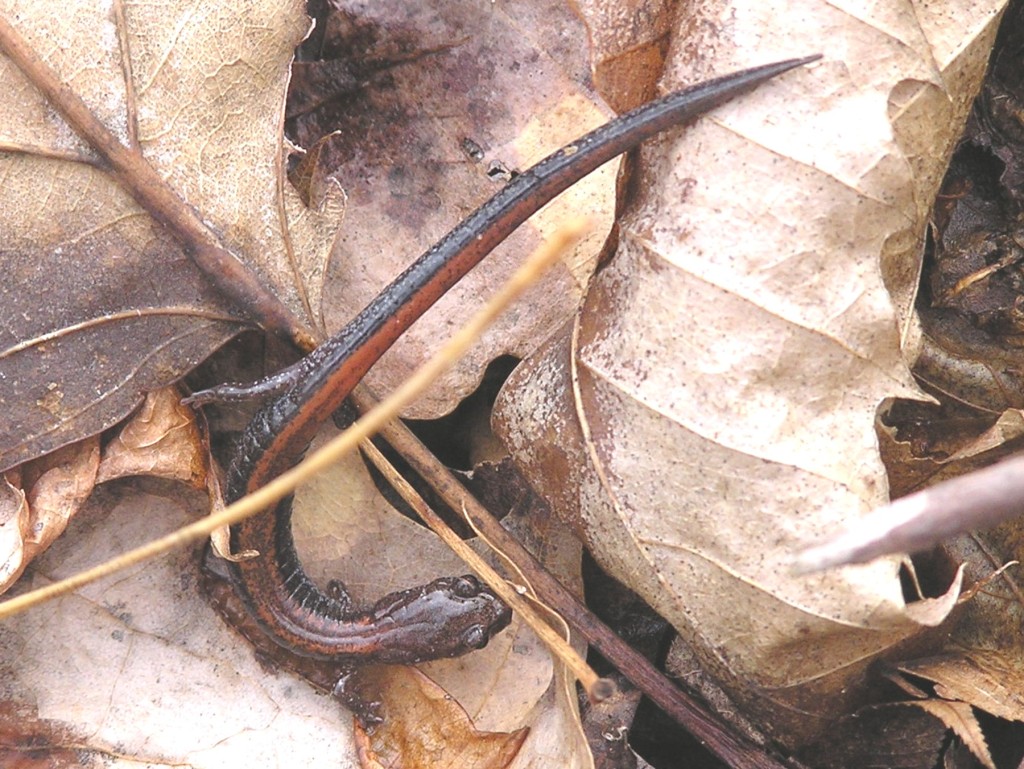 Common Name: Red-backed Salamander – Salamandra is the Greek word for a mythological lizard-like animal capable of enduring fire; a concept that endured through the Middle Ages having been popularized by the Roman naturalist Pliny the Elder (Gaius Plinius Secundus). Many of the salamanders of this species have a distinctive dorsal red stripe.

Scientific Name: Plethodon cinereus – The generic name is from the Greek plethos meaning ‘many’ and odon meaning ‘tooth’ in reference to the number and distribution of vomerine and mandible teeth. The species name is the Latin word for ashen and refers to the ash gray color of the body in areas other than the red stripe.

Potpourri: The Red-backed Salamander is the most successful of the lungless salamanders that are the signature autochthonous animals of the Appalachian Mountain uplands. Their success in adaptation and specialization in the moist leaf litter and hypogeal soil substrate of mountain valleys is testimony to evolution’s inexorable survival pressures. While virtually defenseless from the predation of larger vertebrate carnivores, they are at the top of the food chain of the forest detritus, eating anything invertebrate that comes within reach; ants, snails, spiders and worms are among the menu options. A 1988 study found that Red-backed salamanders consumed 1.5 million individual organisms per hectare per year – a consummate predator.

From the evolutionary perspective, salamanders offer one of the more convincing examples of the thesis that life originated as pelagic and approached terrestrial habitat haltingly; the amphibians offer a transition between the two. Evolution is a theory only in the scientific sense of the definition. Though the fossil record is scant, it is demonstrably clear that amphibians evolved from lunged fish that took advantage of a predator-free littoral teeming with the arthropods that emerged with land plants in the Devonian period some 350 million years ago. The salamanders that emerged in the subsequent Carboniferous (known in North America as Mississippian and Pennsylvanian for the coal forming swamps often depicted with giant dragonflies) were the dominant terrestrial vertebrate reaching Brobdingnagian (Swift’s opposite of Lilliputian) proportions of meters in length. The Permian extinction that followed ended the amphibian reign as the vast marshlands dried out and the reptiles and dinosaurs-cum-birds established their dominance in the Jurassic. The salamanders sought refuge under the rocks.

Lungless salamanders comprise the family Plethodontidae, by far the largest contingent of the salamander order Caudata (Latin for ‘having a tail’; they are the tailed amphibians) representing 60 percent of all extant species. There are over 20 genera and 370 species globally, primarily in the northern hemisphere with 80 in North America of which about 50 are indigenous to the Appalachians (numbers vary according to source). The plethora of plethodons in Appalachia relative to any other place on earth establish the folded mountainous topology to be their fons et origo, speciation having radiated from a postulated singular ancestor. That the loss of lungs is an involution, a return to a more primitive state, is presumed to have been an evolutionary adaptation to environmental pressures. What those pressures might have been is subject to debate, as going lungless seems an odd choice.

As most air-breathing animals have lungs, it is only natural to think of them as the sine qua non of terrestrial mobility. If one is mostly moving about unobstructed in an atmosphere that is 20 percent oxygen, respiratory organs are certainly efficient; they provide the alveolar surface area for the absorption of the oxygen necessary for the REDOX chemistry of metabolism. However, if one is constrained to living under a rock where air is less plentiful, lungs may not be the best answer. It has for some time been hypothesized that lungless salamanders lost their lungs as a matter of excess buoyancy, achieving higher survival rates according to the ability to stay submerged in aquatic habitats. However, a more likely scenario, and one that is consistent with the geologic history of the Appalachian Mountains where they were incepted, is that dermal respiration is necessary and sufficient for oxygen uptake in a near anaerobic habitat for the low metabolic needs of a cold blooded animal. The last orogeny of the Appalachian Mountains occurred in the Permian period about 250 million years ago, which coincides with the rise of the reptiles and the decline of the amphibians. It is logical that the extreme evolutionary pressures of this cataclysm resulted in selection for smaller salamanders that could survive in cryptic habitats, a sub rosa Palladium from the burgeoning reptile predators. And from that singular transformation, the diaspora radiated to populate the isolated valleys of the mountains leading to the wide variation of the present Holocene, or perhaps Anthropocene Era.

The Red-backed Salamander is the most successful of the plethodons based on observed and extrapolated population densities; one study in Virginia estimated 2.8 individuals per square meter – more individuals than all other birds and mammals combined. A similar study in New Hampshire measured 2,583 individuals per hectare (1,000 per acre), approximately equivalent to the mass density of all co-located field mice and shrews. There are a number of factors that contribute to their preponderance, although the ability to avoid predation is likely predominant. Salamanders are small, slow, and not especially robust, seemingly easy prey for their nemeses which include snakes, birds (especially jays, crows and robins), shrews, raccoons, skunks and opossums. The primary defense is crypsis, avoiding visual detection by either coloration or habitat or both, a quid pro quo of their lungless evolution.

Red-backed salamanders are diurnally reclusive, thwarting the light dependent visual sighting of daytime predators by hiding under rocks, logs, leaf litter, and layers of loose topsoil. Emerging under the cover of darkness, they prowl their limited environs, even climbing plants and trees in search of prey. Secondary lines of defense protect them from the occasional nocturnal interloper or the fortunate daytime forager. Their mucous skin, necessary for moisture dependent oxygen absorption, is slimy and therefore affords ill purchase to grasping claws and teeth. The skin also exudes noxious secretions, demonstrably distasteful to some predators; a laboratory experiment found that shrews ate only 4 in 10 of proffered red-backed salamanders. And as a last resort, the tail is sacrificed for freedom, a thoroughly unusual adaptation known as autotomy. Salamanders are the highest order of animals that have limb regeneration abilities; autotomic behaviors are just one manifestation of this. In the predation scenario, the salamander faces its foe tail-first, the caudal appendage arched and undulating in enticement. The sleight-of-tail subterfuge depends on near perfect timing, the tail detaching while still undulating to become the luncheon target (it is edible after all) while the foreshortened amphibian slinks away undetected. The tail grows back, though slightly lighter in hue than the original.

The process of regeneration is compendious – concise but comprehensive. The wound is covered by an epidermal scab-like layer made up of cells called fibroblasts – similar to mammalian stem cells in that they are undifferentiated – that intertwine to form what is called a blastema, the proto-limb. Genetic coding in the blastema contains instructions for the position and function of the entire limb, including tissue, bones and nerves. The result is an operative tail, able to fulfill is function in mobility and stabilization, energy storage, and, should another attack occur, sacrificial decoy. That salamanders have the ability to regenerate body parts has not been lost on the medical research community; efforts are ongoing to understand the mechanism for possible human applications. A recent study at University College London (UCL) discovered that the method involves the communication of signals from the nucleus to the cell surface using extracellular signal-regulated kinase (ERK) activation. The possibilities are profound; one of the researchers at UCL noted that salamanders “are able to regenerate an impressive repertoire of complex structures including parts of their hearts, eyes, spinal cord, tails …. and full limbs.” Maybe Godzilla isn’t all that far-fetched.

The apatetic ashen hue of the red-backed salamander is limned with a red dorsal stripe, the flash of bright color an incongruous beacon for predators – or is it? That this is an aberration of sorts is manifest in the dualistic nature of the species; there is a “lead-backed” variant that lacks the stripe. Color polymorphism is the relevant biological term for the phenomenon where a single species has two or more variants; in the case of red-backed salamanders, there are about equal numbers of the red-striped morph and the so-called lead-phase morph. Numerous studies have been conducted to determine if there are any behavioral or physiological differences between the two; there are. Counterintuitively, the lead-phase morph is subject to a greater degree of predation than the more visible red-striped morph. This behavioral finding is reinforced by observations of relative mobility: the red-backed individual spends more time immobile with the tail raised in defense; whereas the un-red individual is more mobile. However, tail autotomy is more prevalent in the latter pointing to more frequent attacks. From the physiological standpoint, the lead-phase morph has a higher level of stress measured according to a hematological stress index that correlates blood cell populations to stress. This is consistent with the logical notion that higher predation results in higher stress. A syllogistic argument has been advanced to the effect that “if the more visible red-striped morph is subject to less predation than its ash-gray cohort, then the predator must be making an instinctive choice.” As red is commonly employed to indicate toxicity, the terrestrial stage of the red-spotted newt called the red eft being a case in point, it is hypothesized that the red-backed salamander employs what is called Batesian mimicry to take advantage of the verisimilitude. So why, then, are not all red-backed salamanders red-striped as survival of the fittest would mandate? That this is not the case indicates that there are other factors that select for the non-red morph. As red-backed salamanders engage in courtship rituals, sexual selection that prefers “50 shades of gray” would be a logical topic for supplemental research, however sordid.

Red-backed salamanders are territorial, nurturing and, to some extent monogamous; traits that contribute to ubiquity. Territory is tantamount to survival in the competitive natural environment; home ranges under rocks and logs of about one square meter are established and marked by cloacal gland pheromones and by fecal pellets. Males defend their territory viciously, assuming the all-trunk raised (ATR) position and biting to stave off intruders; they are successful in three out of every four encounters. Females select their mates according to physical size, the extent and quality of the prey in their territory, and, in something of an anthropomorphic vein, whether they have the smell of other females. Territorial prey quality is determined by smashing the male’s fecal pellets and inspecting for insect remnants. Partner preference is observed in red-backed salamanders as both male and female benefit from the union; the male gains reproductive fitness and the female has better access to nutritive prey for egg production. The courtship ritual is a structured sequence of suggestive moves by the male to assess his acceptability; if successful the female rests her chin on his tail and, in what is known as the “tail straddle walk,” the sexual act culminates with male deposition of a spermatofore which the female subsequently picks up in her cloacal vent. About a dozen eggs are laid and protected by the female for 6 weeks until they hatch as miniature adults; there is no aquatic larval gilled phase. Efficient and effective.