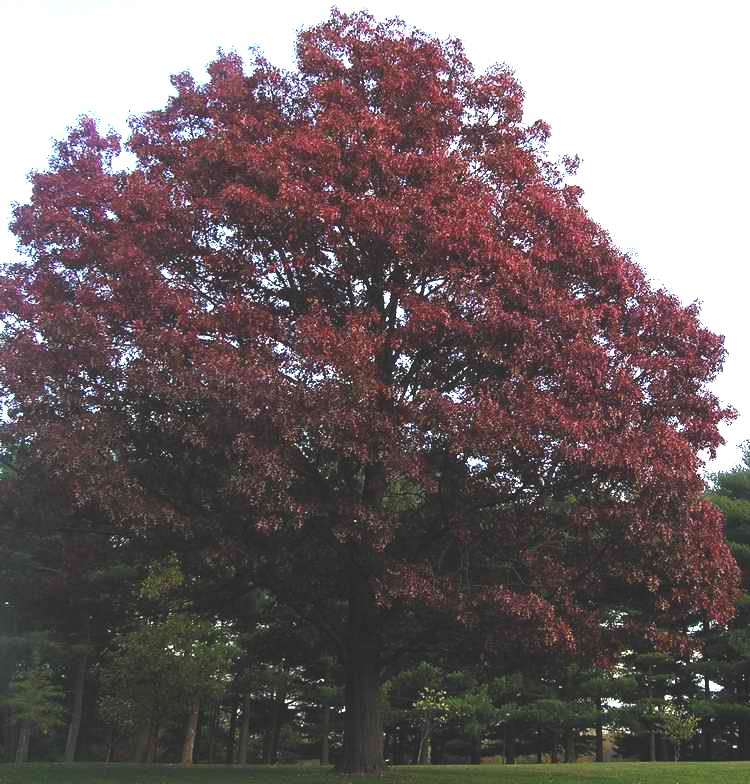 Common Name: Northern Red Oak, Common red oak, Eastern red oak, Mountain red oak, Gray oak – Northern distinguishes the species from the Southern red oak, which is also known as Spanish oak (Q. falcata); red refers to the leaf and twig coloration; oak is from the Old English ac, which is thought to derive from the Greek aigilops, a type of oak growing in Turkey.

Scientific Name: Quercus rubra – The generic name is the Latin word for oak; the species name is from rubor which is Latin for redness. Sometimes referred to as Quercus borealis, the name commonly used from 1915 to 1950. In this case the species name meant north, from the Latin boreas.

Potpourri: The northern red oak is the most notable of the red oaks, subgroup Erythrobalanus (Latin for “red acorns”) that are generally distinguished in having lobed leaves that are pointed at the ends, sometimes referred to as bristle-tipped; white oak lobes are rounded. The red oaks include the scarlet oak (Q. coccinea), named for its more brilliant scarlet fall foliage, and the black oak (Q. velutina). The northern red oak can be distinguished from the other red oaks most readily by its bark and by its leaves. The bark is furrowed into deep ridges that have shiny stripes down the center; the red inner bark is visible between the furrows. The leaves of the northern red oak are much broader with less deeply cut lobes than the other red oaks.

Red oaks also differ from white oaks in acorn production and composition. Unlike the white oak acorn that matures and falls during the same year, the red oak acorn is biennial, remaining on the tree through the winter to mature and fall the following year. The red oak acorn also has much higher tannin content than the white oak acorn, 6 to 10 percent compared to about 2 percent. All oaks are monoecious, in that they have both male and female flowers on the same plant; the fertilizing pollen is transported by the wind to engender acorns. It takes about 500 germinating acorns to yield a single 1-year old red oak seedling.

Red oak is a very important food source for wildlife. A field trial conducted in New Hampshire found that 15 to 30 percent of the diet of the white tailed deer consisted of northern red oak leaves and 5 to 55 percent consisted of red oak acorns. The wide variance in acorn consumption is due to the masting of oak trees; they produce large acorn crops every 4 to 10 years with paucity in intervening years. Red oak acorns are of particular importance to the pre-hibernation diet of the black bear, as they have a fat content of 18 to 25 percent; one pound of acorns has about 1300 calories. Damage to crops and beehives attributed to bears has been noted in non-mast years. Wild turkeys have been known to consume over 200 acorns in a single feeding.

Squirrels eat both white and red oak acorns, preferring the former in the fall and burying the latter for consumption during the winter months. It is believed that this is due to the fact that white oak acorns sprout early, making them hard for the squirrel to digest. Jared Diamond contends in Guns, Germs and Steel that oak trees were never domesticated to reduce the bitter tannin content for human consumption in part because of the effectiveness of squirrel propagation. The other factors against domestication of red oaks are the long period between planting a non-bitter acorn and the appearance of an acorn from the resultant tree (about 50 years) and the high degree of variation in daughter fruit, similar to the variation in the fruit of an apple tree that grew from a seed.

Northern red oak is one of the most important timber products in North America, comprising nearly 25 percent of sawmilling inventories. It is the most commonly used hardwood in the manufacture of furniture and kitchen cabinets and is also widely used for flooring, railroad ties, tool handles, fence posts, plywood, and barrels for storing dry goods (white oak is used for wine barrels, as it has a less porous grain). It was used in colonial America in the construction of plank roads, the oak timbers being laid down in alternating layers to accommodate the transport of heavy wagons from farm to market.