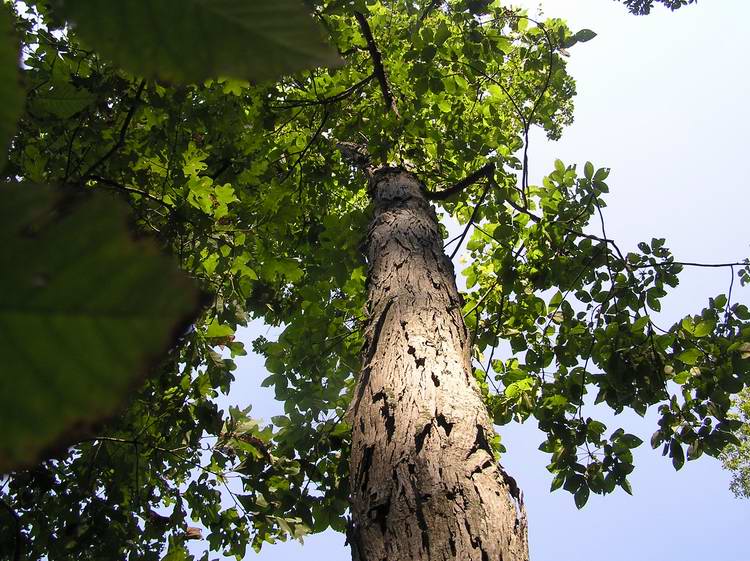 Common Name: Shagbark Hickory, Shellbark hickory, Southern shellbark, Upland hickory, Scalybark hickory, Sweet walnut, White hickory – The bark fragments into longitudinal strips that are attached in the middle and loose on the ends, giving the tree its characteristic shaggy semblance. Hickory is from the Algonquian word pawcohiccora which is the name given to a white, oily decoction of the nuts.

Scientific Name: Carya ovata – The generic name is from the Greek word karya, meaning nut tree. The species name is from the Latin ovum, meaning egg; the nut of the shagbark hickory is elongated into what might be described as a misshapen egg.

Potpourri: Hickory trees are native to eastern North America, the range of the shagbark extending from southern Canada to the upland regions of the southern Appalachians. According to the fossil record, however, hickories extended across most of the Northern Hemisphere during the Eocene Epoch about 50 million years ago; their range included Eurasia and the western United States. Glacial activity of the Pleistocene Epoch about 2 million years ago extirpated the European hickories, as the east-west mountain chains blocked their southern expansion; conversely, the north-south orientation of the North American mountains offered a corridor for the hickories to survive by moving south. Therefore, when the European colonists immigrated to the Americas in the seventeenth century, they discovered what to them was a new tree abundant with large, tasty nut fruits.

Native Americans availed themselves of the ubiquitous hickory trees, favoring the shagbark for its large and sweet-tasting nuts. Indians of the Iroquois Confederacy decocted oil from the nuts and mixed it with animal fat that was applied to the skin as an unguent, thought to have been a sort of insect repellent. Other tribes, including the Dakotas and the Pawnee, used the nuts to make soup and the sap from the bole to make a sweet syrup. An important Indian foodstuff was made by shelling the nuts that were pounded and put into boiling water, the heat inducing the separation of a white, gelatinous material known as pawcohiccora in the Algonquian language of the Virginia Indians. The butter-like substance was used as a spread and as an ingredient in other dishes such as corn cakes. This practice was adopted by the early European colonists, the tree eventually taking on the anglicized name hickory. Hickory milk became a commodity for barter, one quart being the equivalent of about twenty pounds of pork. Nutritionally, this would be consistent, 100 grams of shagbark hickory nuts provides 673 kilocalories, 13 grams of protein, 68 grams of fat and 360 milligrams of phosphorous (100 grams of lean pork has about 700 kcal, 25 grams of protein and 5 grams of fat).

The shagbark hickory is also valued for its wood, which has the notable attributes of high strength, high heating value and aromatic flavorful smoke. Hickory wood has a unique combination of physical properties that make it ideally suited for structural applications. It is very dense (50 pounds per cubic foot – water is 64 giving the wood a high specific gravity of 0.77) and has a high compressive strength (1760 pounds per square inch compared to 1070 psi for oak). Pound for pound hickory wood is as strong as steel and was accordingly used by the colonists for tool handles, fences, furniture, ladder rungs and barrel hoops, to say nothing of the notorious “hickory rod” used on recalcitrant children. As a fuel, hickory produces more BTU’s than any other wood except black locust. A cord of hickory wood has the heating equivalency of almost 200 gallons of fuel oil or about one ton of coal. It was accordingly favored as a feedstock for charcoal necessary to provide adequate heat intensity for the proper operation of colonial and early American iron furnaces. Hickory produces a pleasant aroma that it imparts to food, the famous smokehouse Virginia hams are regaled for their unique hickory smoked flavor.

Hickory trees are monoecious, having both male and female flowers on the same tree. The pollen dispersal is predominantly by wind and does not result in the formation of nuts until the tree is about 30 years old, a fact that contributes to the poor commercialization potential of the fruits. Once in full maturity, however, nut production can be prodigious; over 200 nuts filling about 2 bushel baskets have been reported for a single tree. Hickory trees are subject to a fair amount of hybridization, making species field identification a challenge. The pinnate leaves can vary in number from 5 to 9 (5 to 7 for the shagbark) and the nuts come in a variety of shapes that range from ovoid to round.