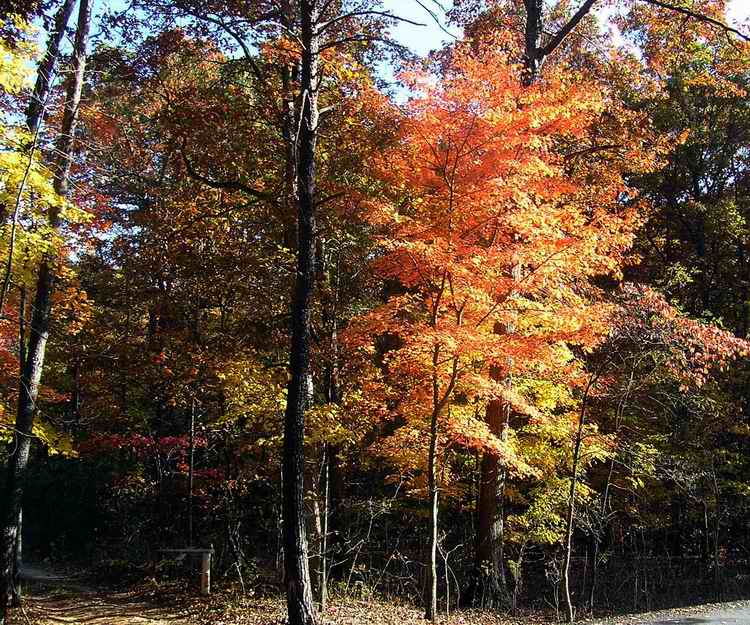 Common Name: Sugar Maple, Hard Maple, Rock Maple – from the Old English mapul originally from Old Norse mopurr; Sugar refers to the sucrose of the sap that is characteristic of the species, Hard and Rock refer to the hardness of the wood.

Scientific Name: Acer saccharum – The genus is either Latin for Maple tree (with a short a) or sharp-pointed (with a long a); the latter referring to the use of the wood by the Romans for spears. The Latin word for sugar is saccharum.

Potpourri:  The Sugar Maple’s foliage is the epitome of autumn and its sap is the harbinger of spring. Though it is only one of 13 maple species native to North America (of some 150 worldwide), its ubiquity is manifest as the state tree of both Vermont and New York. The characteristic five-lobed leaf of the sugar maple became the national emblem of Canada with the imprimatur of Queen Elizabeth II on 15 February 1965. The collection of sap for sugar and syrup has been an integral part of the forest agronomy of eastern North America since well in advance of European colonization.

Maple syrup and sugar derived primarily from the sugar maple were important commodities to Native Americans. The Iroquois considered the sugar maple to be the gift of the creator, and held a thanksgiving celebration every spring to recognize the renewal of the covenant. A drink of maple sap and thimbleberries was concocted to solemnize the event. Maple syrup and wild rice were the mainstays of the diet of the Chippewa. They built specialized temporary camps consisting of small huts with paddles, bowls and containers called mukuks to hold the sap for the conduct of the sugaring operation. Maple syrup was used as a commodity for barter by the Indians of Great Lakes.

Europeans were fascinated with the Native American confection. The noted English chemist Robert Boyle remarked to his associates in 1663 that “there is in some parts of New England a kind of tree whose juice that weeps out its incision, if it is permitted slowly to exhale away the superfluous moisture, doth congeal into a sweet and saccharin substance.” By the late 17th Century, small loaves of maple sugar were initially sent to France as a curiosity, but were ultimately found to be a highly palatable substitute for French sugar.

When colonists were becoming acclimated to the rigors of the New World in the early 18th Century, they adopted the Indian tradition of extracting the sap of the tree to make maple sugar. The process remains largely unchanged to this day. A spout is tapped into the side of the tree and a bucket is used to collect the sap, which is boiled until the sugar content reaches 66% and 7.1 degrees above the temperature of boiling water. The average tap hole will yield about 10 gallons of sap which will produce about one quart of syrup or one pound of sugar after boiling, as the sap is only about 3 % sugar.

The sap of the sugar maple comes from the wood. In the late summer, starches are stored in the parenchyma, central stem cells of the wood. In the late winter or early spring when the temperature rises above 40 degrees F, the starch is converted to sucrose which is released into the wood vessels and forced up the trunk (and out the tap hole) by internal pressures that can be as high as 40 pounds per square inch. The pressure rise is attributed to the increase in the concentration of sugar causing water to be drawn into the roots due to osmosis.

The wood of the sugar maple is very hard, the common name rock maple is testimony to this characteristic. In colonial America, it was widely used for many household items such as rolling pins, apple grinders and cheese presses. Its primary uses today are for furniture, flooring and cabinets. Some trees have an unusual grain pattern called bird’s eye that is the result of knotting induced by a fungus that grows under the bark. These grain variations are in great demand for specialized items like musical instruments.

Sugar maple leaves turn orange-red in the fall because of yellow carotenoid and red anthocyanin. Carotenoids are produced in many plants as an accessory to chlorophyll to absorb more light energy in a slightly different spectrum. Anthocyanins are thought to protect the leaf from damage due to bright light which causes a drop in photosynthetic efficiency called photoinhibition. The anthocyanins absorb some of the energy of the bright light to mitigate this effect. Anthocyanins are also strong antioxidants and protect the leaf from free radical oxidizers also generated under high light conditions. When the temperature drops in the fall, a layer of cells called the abscission forms at the base of each leaf to cut off the flow of nutrients, stopping the production of green chlorophyll. When the green fades, the reds and yellows appear.