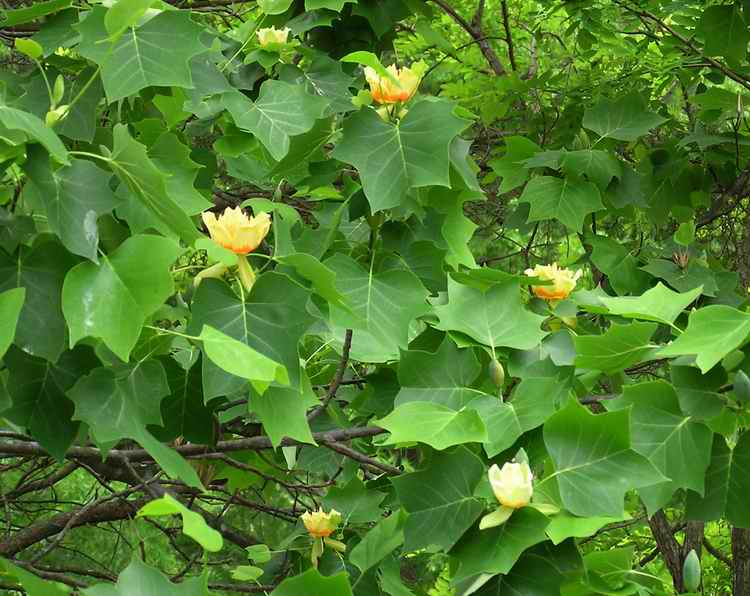 Scientific Name: Liriodendron tulipfera – The generic name is derived from the Greek lirion meaning lily and dendron meaning tree. The more descriptive species name means wild (Latin fera) tulip. The etymology of tulip is tulbend, the Turkish name for the turban; tulips have a rounded shape like that of the Asian headdress.

Potpourri:  The Tulip poplar is the only representative of the genus Liriodendron in the Americas; it was thought to be the only generic survivor of the Pleistocene Ice Age until 1875 when a second species of the genus was discovered in China. The genus was originally named Tulipfera in 1687 but it was reclassified by the Swedish botanist Linnaeus in 1737, presumably because he thought the flower looked more like a lily than a tulip, while in reality it is not related to either. The name poplar is also a misnomer. The Tulip poplar is in the Magnolia family with no taxonomic relationship to the poplars, which are in the Willow (Salicaceae) family. The provenance of the name is a matter of conjecture, though it is likely that early European settlers thought the North American tree was related to the European white poplar.

That the Tulip tree was well known to the early settlers is a matter of record. According to Thomas Hariot, who spent eleven months in the littoral region of Roanoke Island as a member of the first English attempt to colonize North America in 1585, the local Indians made their canoes out of a single tree described as “Rakiock, a kinde of … sweet wood … the timber being great, tal, streight, soft, light, and yet tough enough … to be fit for the masts of ships.” That Rakiock was likely the Tulip tree is supported by reports that the Cherokee also used the Yellow poplar to make canoes, a practice that was adopted by the early colonists; it is purported that Daniel Boone had a Tulip tree canoe, though this is likely apocryphal. The alternative name Canoe wood is a result of this etiology.

The relative abundance of the Tulip poplar with its straight trunk, lack of knotty lower branches, and hard wood promoted its popularity in early America. Sir William Strachey, one of the earliest denizens of Jamestown, described the tree in 1612. The unusual appearance of the leaves and flowers made it a curious exotic species from the savage forests of the New World; John Tradescant is reputed to have exported the tree to Europe in 1656 where it was widely cultivated after 1663. The more unusual names Saddle tree, Lyre tree and Old wife’s shirt are various interpretations of the leaf shape according to European metaphorical associations.

Yellow poplar wood was once the mainstay of the American hardwood lumber industry. The soft, fine-grained wood has a creamy-white sapwood and was accordingly called whitewood, this name then extending to the tree as a whole, particularly along the Eastern seaboard. The alternative name Yellow wood is attributed to the French inhabitants of the central regions of North America. Since 1785, lumbermen have asserted that there are two really two varieties, a Yellow wood variety growing along streams with a preponderance of yellow heartwood and a thin layer of whiter sapwood and the White wood variety in more xeric uplands with mostly white sapwood. Regardless of the color, it was the primary wood for the manufacture of organs, its fine grain affording a tight, precision cut for the running of the necessary pipes and valves; it was also used for more mundane objects like fence posts and railroad ties. More recently, it has been made into furniture parts, frames and veneers and used in the manufacture of door frames, window sashes and other moldings and trim for home construction.

The inner bark of the root and trunk and the leaves have long been recognized for their medicinal properties. The Cherokee Indians used the leaves as a poultice for sores and to make an ointment to apply topically for inflammation. Other Native American tribes made tea from the bark to treat fever and indigestion; the bark was also chewed as an aphrodisiac stimulant. The medicinal use of the Tulip tree was adopted by the colonists for a variety of folk remedies including toothache and malaria. By 1787, it was recognized that a tincture of the root and bark was useful as a febrifuge to treat rheumatic fever. It was listed in the U. S. Pharmacopoeia in between 1830 and 1880 as a stimulant tonic with diaphoretic (perspiration inducing) properties for use against intermittent fevers. A substance was isolated from the bark in 1831 by a Professor J. P. Emmet which he named liriodendrin. Subsequent work in 1886 resulted in the identification of the active constituent of the bark as an alkaloid that was named tulipferine.