Common Name: Fiddlehead, Crosier – The unwinding growth of ferns emerging in vernal extension has the appearance of the scroll that lies just above the tuning pegs of any of the fiddle-shaped stringed instruments that vary in size from the violin to the bass. A crosier is a staff with a similar spiral at the top that is used as a pastoral symbol by a bishop or abbot.

Scientific Name: Circinate vernation – The latter more general term derives the Latin vernare meaning to flourish as in ‘be verdant’ and refers to the arrangement of leaves within the growing bud. Circinate is from the Latin circinare meaning ‘to make round’ and refers specifically to the botanical configuration of a flat coil with the apex at the center, as is the case with fern fronds.

Potpourri: A fiddlehead fern is not a type of fern; it is a descriptive term for the early growth configuration of a fern as it deploys from its rooted origination every spring, a circinate vernation. This unusual morphology is an evolutionary adaptation that must in some way contribute to the apparent reproductive success of the ferns as they are among the earliest and most primitive of land plants having first appeared in the Devonian period about 400 million years ago; they are notably ubiquitous in the Anthropocene era. The reproductive mechanism of ferns is a complex of two alternating forms: a spore grows to a miniscule gametophyte that produces male and female sex organs to produce the gamete from which the fern grows; and the frondiferous sporophyte green plant produces the spores from which the gametophytes emerge. In a bit more detail, the spore produces a small, scale-like body called a prothallus (Greek for ‘before’ the ‘young shoot’) that then engenders the male gamete called antheridium and the female gamete or archegonium, the sperm from the former swimming to fertilize the egg of the later to produce the frond. It is the pons asinorum of botany students. 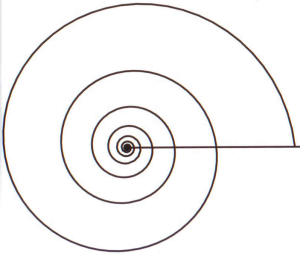 The fiddlehead is a natural Gesamtkunstwerk – one of biology’s most beguiling creations; a vernal awakening constrained by the strictures of physics. In mathematical terms it is known as an equiangular spiral – first described in 1638 by French mathematician René Descartes as a curve that spiraled outward such that a radius drawn from any point to the center would cross any of the crossing points at the same angle. British astronomer Edward Halley called it the proportional spiral because the sections of the spiral maintain their proportions as it extends outward, a characteristic known as self-similarity. The elegant simplicity of the shape so beguiled Swiss mathematician Jacob Bernoulli that he gave it the name spira mirabilis, Latin for ‘wonderful spiral.’ Bernoulli is known for his contributions to calculus and for his derivation of the natural number e (2.71828…) that is the basis for natural logarithms. He knew the shape as the logarithmic spiral because there is numerical relationship between the angle θ at a point to the logarithm of its radius r from the center; his genius is reflected in the recondite relationship that this entails (the polar equation is r = aebθ). He wrote that the wonderful spiral “may be used as a symbol, either of fortitude or of constancy in adversity, or of the human body, which after all its changes, even after death, will be restored to its exact and perfect self.” To characterize this philosophical ideation, he applied the descriptive motto eadem mutate resurgo meaning ‘although changed, I rise again the same,’ which he had engraved on his grave marker as a matter of consecration. The seminal Bernoulli’s equation was named for Jacob’s cousin Daniel (the Bernoulli family included thirteen notable mathematicians); it relates pressure to velocity and forms the mathematical basis for the lift of air foils and speed-measuring venturi tubes.

The other type of spiral, where no outward growth is involved, is called the equable or Archimedean spiral (who described it in the book On Spirals) and is the shape of a rope wound on a deck in a coil or more familiarly the shape of a roll of paper. As an example of a picture being worth a thousand words, Archimedes provided the following description of his eponymous spiral: “If a straight line one extremity of which remains fixed is made to revolve at a uniform rate in a plane until it returns to the position from which it started, and if, at the same time as the straight line is revolving, a point moves at a uniform rate along the straight line, starting from the fixed extremity, the point will describe a spiral in the plane.” This lends some credence to the elegance of mathematical expression; the equable spiral is r = aθ in polar notation.

The forces that give rise to the spira mirabilis are not that uncommon in nature. The chambered nautilus is the most well-known example. It is relatively easy to contemplate the growing mollusk expanding outward from its original gestation point at the center and adding additional chambers that would of necessity have the same shape, a form of topology. Elephant tusks, rams’ horns and ammonite shells have similar curvatures. It is also found in the plant kingdom in what is known as a scorpioid cyme, an inflorescence that grows from one side of the stem at a constant angle; examples include forget-me-nots and heliotropes. It is the path taken by a moth in its inexorable attraction to light, keeping the light at a constant angle as it reduces the distance to the light source logarithmically. In one of the more intriguing examples of Darwin’s “elegant forms most beautiful”, peregrine falcons approach their prey at speeds of 200 miles per hour along a logarithmic spiral rather than in a straight line, which would seemingly result in an even faster coup de grace. This so troubled a research biologist at Duke University named Tucker that he conducted wind tunnel experiments (published in the Journal of Experimental Biology in 2000) to demonstrate that if the falcon flew on a direct path, it would need to tilt its head by about 40 degrees to keep its prey in sight with a concomitant reduction in speed; the equiangular spiral maximizes speed without the aerodynamically costly head tilt. One may only conclude that the falcon that originally figured this out was successful enough as a provider to enhance the survival of its fledglings, – who inherited the trait.

While the notion of an equiangular spiral is logically consistent with a growing mollusk producing proportionately larger chambers and with falcons selecting a maximum speed angle of attack, there is no immediately apparent reason why ferns grow in fiddlehead spirals. According to Robbin Moran, the curator of ferns at the New York Botanical Garden in A Natural History of Ferns, it is a matter of unequal growth of the cells on the inner and outer surface: “In fern fiddleheads, unequal growth is caused by cells on the outer surface (the surface farthest from the axis of coiling) elongating more than those on the inner.” According to this logic, the fern starts to uncoil when the cells on the inner side of the coil start to elongate, a process known in botanical lexicon as epinasty. While this is adequate to explain how the cells grew differentially to form the coil and how they unroll the coil when it matures, it fails to explain why the coil forms in the first place. One hypothesis is that the fiddlehead roll-out of the fronds shields the all-important reproductive spores from the ravages of emergence to enhance their viability for deployment and germination, an adaptation to improve reproduction and thereby improve survival. This is supported by the observation that large tree ferns deploy their side pinnae as fiddleheads, shielding the spores that are deployed in sporangia on the underside of the individual pinnules. Many of the fungi commonly called mushrooms similarly shield their spores while emerging from the epigeal mycelium from which they grow – perhaps ferns follows suit. Spores will be spores.

The fascination with the fiddlehead fern form extends to ethnography as a matter of prandial interest; humans have been eating fiddleheads for millennia. There is no evidence, however, that fully grown ferns were ever consumed. It is probable that the penchant for fiddleheads arose from the desire and need to eat fresh food after a winter of scarcity: fern shoots come up early in the spring; they are compact and dense foodstuffs and they are relatively tender and palatable. Fiddlehead consumption is global, though it is most commonly found in Asia, especially in Korea and in North America, where the practice was largely adapted by the colonists from Native American customs. The choice of fiddlehead fern type in the vast cornucopia of available varietal species is a matter of custom, availability, and certainly taste. The most common ferns that are consumed are those that are relatively abundant and large, including Bracken (Pteridium aquilinum), Ostrich (Matteuccia struthiopteris), Lady (Athyrium filix-femina), Cinnamon (Osmundia cinnamomea) and Royal (Osmundia regalis).

However, eating wild ferns has some of the same potential pitfalls as eating wild mushrooms; while they won’t kill you they may make you sick and perhaps cause longer term health issues. Bracken ferns are the most notorious, as they are known to contain the carcinogen ptalquilocide in very high concentrations (almost one percent of dry weight). However, ptalquilocide is water soluble and highly volatile so that the normal cooking process of soaking fiddleheads in water and then cooking them renders them essentially harmless. They have been consumed copiously on almost a daily basis in Korea for centuries; they are a key ingredient in the classic dish bibimbap. Ostrich fern fiddleheads are popular wild vegetables in Canada and northern New England due to their size and ubiquity. There have been many reports of gastrointestinal distress attributed to fiddlehead consumption. For example, a thorough investigation of food poisoning at a New York restaurant in 1994 revealed that ostrich fern fiddleheads were the culprit and that of the 56 patrons contacted, 31 experienced vomiting and diarrhea within 12 hours of consumption. The fiddleheads in question had only been sautéed for 2 minutes. The conclusion reached by Health Canada was that fiddleheads were safe if boiled for 15 minutes or steamed for 12 minutes before consumption. That is the consensus – bon appétit.