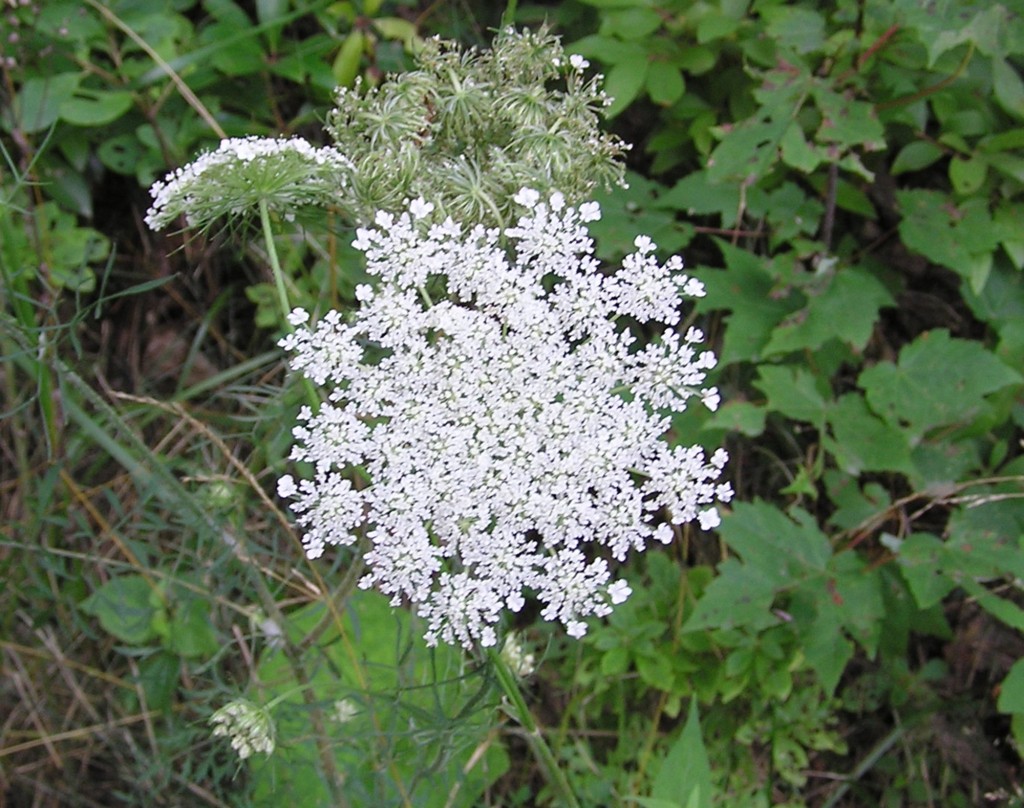 Scientific Name: Daucus carota – The generic name is from the Greek root word daukos which is related to the word daiein, meaning to ignite or burn; some plants of the genus have a very acrid taste that burns the mouth. Carota is the Latin word for carrot from the Greek karōton, which is probably from the word kara meaning ‘head.’ This may be because of the large size of the umbel type florescence. It is sometimes listed as D. gingidium in older texts.

Potpourri:  Queen Anne’s Lace is probably the most whimsical floral metaphor that the English speaking peoples applied to their new environs as they settled and colonized the New World. The weedy native Eurasian plant known in England as wild carrot was transported inadvertently, probably in the early shipments of grain that sustained them in advance of established plantations. A biennial, it produces prodigious quantities of seeds that are effectively disseminated by the tumbleweed trajectory of the umbel head, their subsequent germination responsible for the ubiquity of the flower. The plant consists of a symmetrical array of small white florets that bears a striking resemblance to an antimacassar (doily) on the back of a drawing room chair. Near the center of the white expanse one can usually find a singular purple floret, whose purpose and evolution is still a subject of considerable debate among botanists.

There are myriad theories for the etymology of the North American name Queen Anne’s Lace; in Great Britain, it has been called the wild carrot ever since it was so designated by the English botanist William Turner in his 1548 work, The Names of Herbes. Anne was the Queen of England from 1702 to 1714, the last of the Stuart regents who preceded her second cousin, George I of the German House of Hanover. The most prevalent legend is that Queen Anne, who was somewhat of an outsider having married a Danish prince, sought to establish her ascendency over the ladies of the court by challenging them to make tatting as graceful and elegant in appearance as the wild carrot, as only she, a renowned lace maker could do. As none succeeded, she established her regency. This is embellished by the codicil that she pricked her finger while making lace, the effusion of her blood imparting the purplish hue to the singular floret. I would offer a much more facile and direct etymology. The English colonists who proliferated in New England in the early 18th Century likely noticed that the weedy plant that they know as wild carrot back home had begun to appear in the waste areas adjacent to their fields and paths. Since Anne was Queen of England at this time, and since the flower indubitably looks like lace, it became Queen Anne’s lace, a lacy flower from the homeland. As it is an excellent mnemonic metaphor, it entered the American argot.

The evolutionary origin of the singular purple-hued floret near the center of the umbel has been the subject of considerable debate in the botanical community for many years. It was long thought to be simply an anomaly, but a growing appreciation of the extent to which evolution drives physiology has led to the consideration that it is there for a purpose, which is fairly evident on inspection. It looks like an insect from a distance. It is therefore hypothesized that the insect-like floret attracts other insects according to the duck decoy in the pond effect. This would enhance the pollination chances of the flower and therefore improve its chances of survival, a Darwinian fundamental. The scant field testing that has been done to validate the hypothesis has not yielded a viable result, so it is still a matter of speculation. Since Queen Anne’s lace is very successful at replication, one could certainly make the argument that an enticement to pollinators would be a contributing factor. Once pollinated, the individual florets produce fruits with small spines that readily attach to animals. The umbel curls up into a ball, whence the common name bird’s nest, which acts as a seed dispenser when detached from the host plant.

While Queen Anne’s lace and the domestic or garden carrot share the same species name (Daucus carota), it is not necessarily true that they are the same plant. Logic would dictate that the former is a cultivar of the latter and it is usually referred to as D. carota var. sativa (from the Latin word meaning cultivated), but some authorities hold that the wild carrot is a derivative of the domestic carrot that escaped from cultivation and hybridized. This latter view gained credence based on a failed attempt by the renowned 18th Century Scottish botanist Philip Miller to improve on the wild carrot by hybridization. He could not produce anything resembling the recognizable orange tuber in spite of a concerted effort. It has also been observed that garden carrots revert to the wild in several seasons; the result differs from D. carota. On the other hand, the American agronomist Lewis Sturtevant was a strong proponent of the view that the wild carrot is in fact the progenitor of the garden carrot. Writing in Sturtevant’s Edible Plants of the World, he notes that “the wild plant is the original of the cultivated carrot, for, cultivation and selection, Vilmorin-Andrieux (the French seed company founded by the botanist to King Louis XV) obtained in the space of three years roots as fleshy and as large as those of the garden carrot from the thin, wiry roots of the wild species.”

The carrot is referred to in ancient writings without regard to the any distinction between the wild and garden varieties. Tracing the etymology is complicated by the fact that it is frequently conflated with the parsnip, a tuber of similar provenance. Gaius Plinius Secundus, the Roman naturalist better known as Pliny the Elder wrote of the carrot that “they cultivate a plant in Syria … the wild carrot, which some call gingidium, yet more slender and more bitter, and of the same properties, which is eaten cooked and raw, and is of great service as a stomachic … called by us gallicam but by the Greeks daucon.” Note that D. gingidium and D. carota are synonymous and that the name gallicam likely meant that it came to Italy from France (Gaul). It is the general consensus that the carrot was first cultivated in what is now Afghanistan and made its way throughout the Old World. It was known to the Greeks and Romans; in addition to Pliny, the Greek physician Galen offered the opinion that the root of the wild carrot was not as palatable as that of the domestic carrot. It had made its way to China in the 13th Century Yuan Dynasty and thereafter spread throughout Asia. The domestic carrot is reputed to have been brought to England by the Dutch in 1558 whence it made its way to the New World; it is reported to have been cultivated in Virginia in 1609 and Massachusetts in 1629. It’s ubiquity is best captured by Sturtevant, who writes that “so fond of carrots are the Flathead Indians of Oregon, that the children cannot forbear stealing them from the fields, although honest as regards other articles.”

The wild carrot version of D. carota has a long history of use for a variety of medicinal treatments of which contraception is the most prevalent. Hippocrates, the Greek father of Western medicine, first ascribed this attribute in addition to its more purposeful use as an abortifacient. The seeds of the wild carrot were first used in a potion for contraception by the Soranus of Ephesus, the 2nd Century Greek physician of Rome, and, notably, the author of the four volume treatise on gynecology. The subsequent use of the wild carrot potion as an abortive pessary was opposed by some physicians, particularly Scribonius Largus, the physician of the Emperor Claudius. He argued that the Hippocratic Oath which forbade doing harm could not allow for the termination of life. The debate about a woman’s reproductive rights did not, at this time, likely enter into the discussion; it is nonetheless interesting to note that the issue has roots that are as ancient as those of the wild carrot. There has been some limited clinical evaluation of the contraceptive properties of the wild carrot. Studies in the late 1980’s showed that progesterone synthesis was arrested in pregnant experimental trial animals that were administered a wild carrot preparation. The reduction in the propensity for the fertilized egg to become embedded in the uterine wall due to the dearth of progesterone would limit viability and thus promote contraception. There was apparently an experiment conducted in New York City in which twelve women used wild carrot seeds as their only means of contraception. Three conceived; not a very positive result.

The medicinal properties of D. carota go well beyond its dubious merits as a contraceptive. It is described in various herbals as having a wide variety of generally beneficent effects that range from kidney stone prevention to the aphrodisiac stimulation of the sex hormones. The complex chemistry of the plant is responsible for its panacea-like herbal notoriety; it contains everything from asarone, a potent fungicide and bacteriophage, to xanthotoxin, a treatment for skin disorders such as psoriasis. Thomas Culpeper in his Complete Herbal of 1652 promotes wild carrots to “provoke urine and women’s courses, and helpeth to break and expel the stone; the seed also of the same worketh the like effect, and is good for the dropsy, and those whose bellies are swollen with wind. The leaves being applied with honey to running sores or ulcers, do cleanse them.” One of the more promising constituents of the wild (and garden) carrot is falcarinol, also known as carotatoxin, a fatty alcohol and natural pesticide. Preliminary research has demonstrated that it has anti-cancer properties in the reduction of tumor formation in laboratory rats.