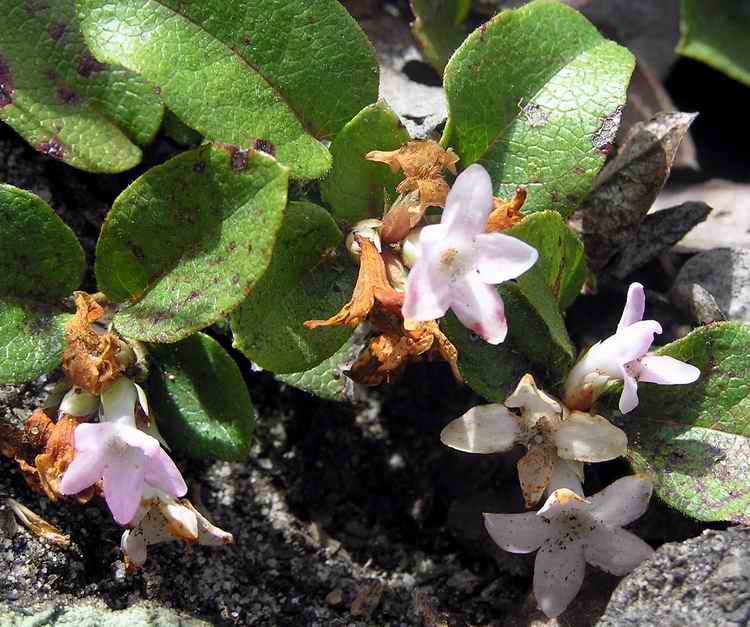 Common Name: Trailing Arbutus, Mayflower, Gravel Plant, Ground Laurel, Winter Pink, Shadflower, Mountain Pink, Crocus – Arbutus is a genus of trees of the heath family with dark green leaves and white to pinkish flowers (Arbutus is the Latin name for the wild strawberry tree); trailing applies to a branch or shoot that extends along the ground as a runner. The common name conveys that the trailing arbutus was once considered a member of the genus Arbutus, distinguished in that it trailed along the ground.

Scientific Name: Epigaea repens – The genus name is from the Greek epi meaning ‘on’ and gaea, meaning ‘earth’; repens is Greek for trailing or creeping; the emphasis is again on a plant that extends along the ground.

Potpourri:  The cultural relevance of the Trailing Arbutus belies its seeming insignificance as a diminutive shrub with ephemeral flowers that lies close to the ground, typically buried under leaf litter. Though the story may be apocryphal, it was supposedly named the Mayflower by the Pilgrims. Since the vessel which brought them to Plymouth, Massachusetts in 1620 was also named the Mayflower (which is the English name for the shrubby tree known as hawthorn in North America), there is ample reason to question the veracity of this assertion. The tale is generally embellished with the notion that it was the first flower that the Pilgrims saw after their first and most arduous winter; the name Mayflower a metaphor for their ship which also saw them through danger. The etiology of the folksy version of events is probably the poem The Mayflowers by John Greenleaf Whittier; the Mayflower metaphor linking the ship with the flower being presumably employed for literary effect:

Yet, “God be praised!” the Pilgrim said,
Who saw the blossoms peer
Above the brown leaves, dry and dead
“Behold our Mayflower here!”

The Trailing Arbutus or Mayflower was accordingly pronounced to be the state flower of Massachusetts in 1918. It is also the provincial flower of Nova Scotia; it embellished the reverse side of the 1856 Victoria penny.

E. repens is a noted pharmaceutical, used most generally in the treatment of kidney and urinary disorders. In the King’s American Dispensary of 1898 it is noted as “a very valuable American remedy, and is highly beneficial in … all diseases of the urinary organs attended with vesical (bladder) irritation. It renders the urine less irritating.” The name Gravel Plant derives from its use in purging kidney stones; it was sold as a folk remedy for this purpose by the Shakers religious sect. Trailing Arbutus was also used by several Native American tribes in the treatment of kidney disorders. The Cherokee Indians, however, used it to treat indigestion and diarrhea, especially in children and the Iroquois used it to treat joint pain. Its effects are attributed to the glycoside arbutin, which is an effective antiseptic for the urinary tract. However, arbutin hydrolyzes (reacts with water) to produce a toxin called hydroquinone. This toxicity is perhaps the source of the notation in the King’s American Dispensary that “cattle that chew this herb are said to be seriously affected by it.” One would presume this to refer to a deleterious result.

The fragrance of Trailing Arbutus, which is characterized as strong, tropical and unforgettable contributed to its notoriety to both the Pilgrims and the autochthonous Native Americans. It was considered by many tribes to have divine origins, the basis for myths that transcend cultures. The Ottawa Indian version is of an old man who lived alone, praying that he would not succumb to the harsh winter. The winds accordingly blew open the door to his lodge and a beautiful maiden entered whose breath made the air warm and fragrant, causing the old man to fall into a deep sleep. The maiden passed her hand over the old man’s head, and he shrank into a small mass, his clothing turning to desiccated leaves. The maiden then took some delicate pink flowers from her cloak and hid them in the leaves, imparting to them the sweetness of her breath and all of her virtues. As the maiden moved away through the woods, wherever she stepped, and nowhere else, grew the Trailing Arbutus.

The popularity of Trailing Arbutus has been its bane as well as its boon. During the early 20th Century, the delicate appearance of the flowers in combination with their olfactory attributes made them a favorite for nosegays. Commercial interests nearly eradicated the plants in much of New England, where they are now protected by law in a number of states. That E. repens is very difficult to transplant and cultivate exacerbates the problem.