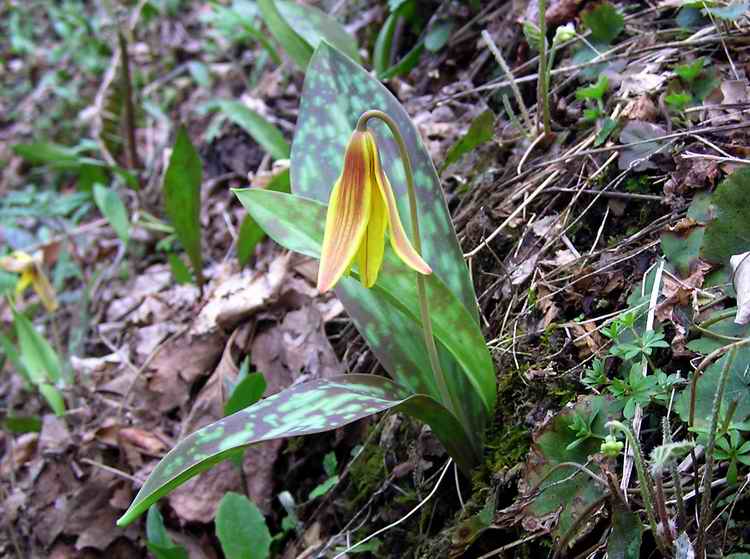 Scientific Name: Erythronium americanum – The generic name is taken from the Greek word for red, erythros; the flowers of a prominent member of the genus that is native to Europe (E. dens-canis) are pink to purple in color. The species name is a neo-Latin version of America; the trout lily is native to North America.

Potpourri:  The diverse metaphorical names of the Trout lily are evidence of its ubiquity and of its distinctive appearance and characteristics. The green leaves are covered with contrasting earth colored pigmentation that resembles a brook trout to some, to others a deer’s tongue. The two leaves that extend upward from the ground are reminiscent of the ears of an alert fawn; the mnemonic fawn lily reflects this association. Alternatively, the irregular markings of the leaf are vaguely suggestive of the camouflage coat of a fawn. Adder’s tongue refers either to the appearance of the leaves as they emerge in the spring or to the appearance of the emerging stamens of the flower, protruding like the tongue of a snake. The use of yellow as an adjectival description is to distinguish E. Americanum from the closely related E. albidum that is white in color.

The alternative common name dogtooth violet has the most convoluted provenance. The trout lily grows from a deep root that extends some ten centimeters underground, terminating in a corm or bulb. The corm is elongated into a cone shape that has the appearance of a dog’s canine tooth, or dogtooth. Since the leaves emerge in the spring at about the same time as the violet and are equally pullulating, the association was established, dogtooth violet the result.

As an early spring ephemeral, the trout lily has evolved to account for the possible paucity of insects necessary for pollination. The “dogtooth” corm sends out horizontal stems called stolons that permeate adjacent areas to the extent that large tracts are covered with the mottled leaves. The alternative common name thousand leaf is descriptive of this observed behavior. Since each clonal group has its own characteristic leaf pattern, it is possible to determine their relationships by observation. It has been estimated that this asexual, vegetative modality is responsible for over ninety percent of the North American trout lily population. There is some debate among botanists concerning the dichotomy between the vegetative and sexual modes of trout lily propagation. It is held by some that the asexual plants have only one leaf and never flower whereas the sexual, seed-produced plants have two leaves that will result in a flower; the progeny incorporating genetic variability to enhance species survival. Field experiments have confirmed that the more successful trout lilies are those that are cross-pollinated. It takes about seven years for the plant to reach sexual maturity, only then producing the yellow flower with six tepals at the top of the scape, a leafless stalk that grows from the crown of the root. A tepal is an undifferentiated form between a sepal and a petal; the trout lily has three petals, three sepals, or, alternatively, six tepals.

The Trout lily corm is an edible root vegetable. According to the International Health Exhibition held in London in 1884, the trout lily bulb was ground into a fine powder and “made into something like vermicelli called ‘katakuri men’ and is chiefly used as material for making confectionary.” In Japan, the closely related Erythronium japonicum is called katakuri and is processed into a starchy powder called katakuriko that is used in food to thicken sauces and to make tempura. Potato is now frequently used instead due to the high cost of the lily corms. The leaves are also edible and can be eaten raw as a salad.

The Trout lily has been used for millennia to treat a variety of ailments. Roman soldiers purportedly used it to treat corns and other foot-related problems. Native Americans used the plant according to the cultural practices of the individual tribe; Iroquois women ate raw leaves for contraceptive purposes; the Cherokee chewed the root and spit it into the water to attract fish. A medicinal tea was prepared from the leaves that was used fevers, ulcers and swollen glands. A poultice made from grinding up the corm and the leaves was used as a vulnerary and to reduce swelling. Dried leaves are used in alternative medicine as an expectorant and an emetic. E. americanum was listed in the U. S. Pharmacopoeia as a treatment for gout from 1820 to 1863.