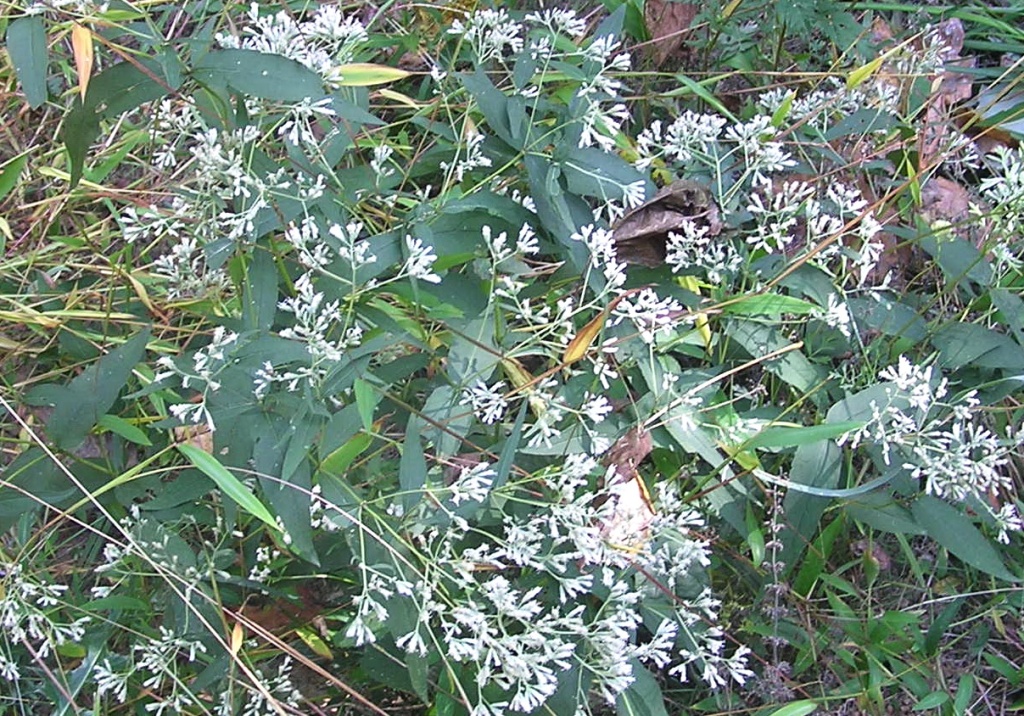 Scientific Name: Eupatorium perfoliatum – The generic name is eponymous; Mithradates VI Eupator (aka Mithradates the Great) was the last king of Pontus, an ancient kingdom in the Anatolian region of the Black Sea, who fought unsuccessfully against the hegemony of Rome from 95 to 63 BCE. Eupator, which is from the Greek eupatrides for ‘having a noble father,’ was occasionally used to distinguish one of the early European kings in an otherwise numerical lineage. According to legend, the youthful Mithradates Eupator discovered a plant that conveyed an immunity to poison; the genus is comprised of a number of plants with complex chemical constituents. The species name is Latin for ‘through the leaf’ to indicate that the leaves grow around the stem such that they appear to perforate it.

Potpourri: The myriad common names are associated by pharmacological leitmotif; boneset was probably the most widely used natural herbal remedy of the native peoples of eastern North America, a practice retained and to some extent expanded by the early colonists to deal with the health issues pertinent to the rigors of frontier life. Its popularity was in no small part due to its ubiquity; boneset is quite common in the wetland areas that abut elevated deciduous forests and extend into bottomland drainage basins. In dense stands that exceed three feet in height, the multiple white fascicles that make up each flower head sharply contrast with the verdant backdrop with clarity. As a member of the Aster family, boneset flowers are composite, each floret producing a wind-borne achene type seed; the combination of multiple seeds and convective transport a recipe for evolutionary success evidenced by their spread. Once germinated the successful seedling expands by vegetative growth to form dense stands in appropriate habitats.

In the foundational Linnaean taxonomy, many of the flowering plants that comprised the genus Eupatorium were related according to the medicinal potential of their constituent chemistries implied by bitterness. In addition to E. perfoliatum and its superficial variants such as tall boneset (E. altissimum), sweet Joe Pye Weed (E. purpureum) was also called gravel root to indicate a kidney stone palliative and white snakeroot (E. rugosum) was used as a poultice for snakebite. In that many pharmacological compounds are effective at the prescribed dose but can be lethal at elevated doses, it is no surprise that this is true of herbal medicines as well. An overdose of white snakeroot, for example, results in what is called milk sickness as it was most frequently contracted from drinking the milk from cows that had grazed on the plant. In the modern era of genomics, the Linnaean order is under significant revision, Joe Pye Weed is now in the new genus Eutrochium and White snakeroot is now Ageratina altissima. The antonomasia of Eupator and health is also geographic; Eupatoria is a city in Crimea, now in dispute between Ukraine and Russia, that is noted for its natural curing factors including unique mud, sea and mineral water, air and sun, sand and herbs.

The ‘most common’ common name of boneset is so graphic in implication for its use in the treatment of broken bones that it has inspired a creative etymology. The general notion was that the perfoliate leaves that surround the stem were, in a metaphorical sense, healing the bone-like stem; syllogistically boneset should then be effective in setting a stem-like bone. The idea that the appearance of a plant indicated its human use is known as the Doctrine of Signatures, an anthropic philosophy of yore when faith served for science. The fundamental idea is that God placed plants on Earth for man to use and “signed” them for that purpose according to some combination of color, shape and/or structure. It is, however, highly unlikely that this had anything to do with the naming of boneset; for one thing, there are a number of prominent plants such as the perfoliate bellwort with similar leaf structure – why choose boneset? The name likely derives from its use in the treatment of break-bone or dengue fever as it was already widely used as a febrifuge. The term break-bone fever is normally ascribed to Dr. Benjamin Rush, one of the signers of the Declaration of Independence, who wrote a treatise on an outbreak of the fever in Philadelphia in 1780; severe joint pain being one of its more notable symptoms of dengue. There is, however, some credence to the assertion that it was placed inside bandages used to immobilize broken bones to meliorate healing as this was the practice of a number of Native American tribes, notably the Abnaki and the Iroquois. However, it should be noted that boneset was used by both the Indians and the colonists for almost anything, as the alternative common name Thoroughwort implies in the sense that thorough means complete.

Boneset was the aspirin of its day; it instantiated healing. In the rural backcountry outposts of the early American enterprise, a shrubby bough of dried boneset was sedulously maintained for use in the treatment of everything from the common cold to bilious humors. While specific doses and preparations varied widely, crushed leaves and flowers steeped in hot water was the predominant technique, the resultant tisane a bitter concoction reportedly dreaded by its frequently youthful recipients – there was no recourse to electuary as there was no sugar to “help the medicine go down.” It is certain that the widespread use of boneset was one of the many herbal practices adopted from Native American usage. In addition to its use for the traditional flu-like ailments, there were a number of imaginative uses that suggest panacea; the Cherokee had 59 different remedies. The Chippewa applied root fibers to whistles to attract deer and made poultices for the treatment of rattlesnake bites. But the Iroquois were the most creative, using boneset as a poison to put in their enemies water flasks and as a primitive methadone to alleviate alcohol dependency. The acceptance of boneset by the medical community was manifest in its inclusion in the U. S. Pharmacopeia from 1820 until 1916 and in the National Formulary from 1926 to 1950. In one documented case, it was used during the influenza pandemic of 1918-1919 to treat one thousand afflicted patients with only five fatalities, or .05% compared to the worldwide death rate of about 10% (50 million fatalities of 500 million afflicted worldwide).

Advances in science over the last century allow for some understanding of the real and purported benefits of boneset. As revealed by chromatography and mass spectrometry, it is chemically complex; sesquiterpene lactones (STLs), polysaccharides, flavonoids and phenolics are all produced for reasons that have everything to do with boneset survival and nothing to do with human health. However, it is not surprising though serendipitous that the STLs are antiprotozoal and the polysaccharides are phagocytes (cell-eating), as they likely evolved to protect the plant from invasive microbes, insects and herbivores. While there have been no clinical human trials, numerous scientific studies have found that boneset extract exhibited significant inhibitory effects against malarial plasmodia when tested in vitro and that it provided beneficent immunological modulation. Given the nature of “Big Pharma,” it is unlikely that this will go any further. However, in modern phototherapy, boneset is widely, and probably rightly, prescribed.