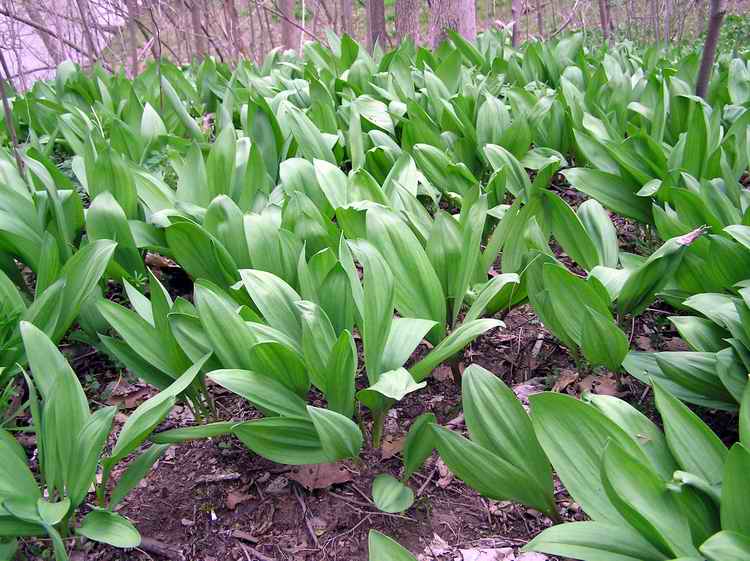 Scientific Name: Allium tricoccum  – Allium is Latin for garlic; tricoccum is a combination of the Latin words for three berries, referring to the three-lobed fruit

Potpourri: Ramps emerge from the leaf litter on the forest floor very early in the spring, two to three oval shaped leaves emerging from each bulb. Large colonies can cover a hillside. The Ramp or wild leek has a flavor and odor that is characterized as being a cross between garlic and onion. However, the ramp should be eaten with caution, as the aroma imparted to the body is pungent. Ramp has long been the subject of festival among southeast mountain people as it was regarded as a spring tonic that cleansed the blood, most likely due to the abundance of its Vitamin C that was lacking in their winter diet.

The name “Ramp” derives from England, where a similar wild leek is called ramson (Ram’s son) as it appears under the zodiacal sign of the ram, Aries, March 20 to April 20. As an etymological alternative, it may also derive from hramsa, Old English for garlic.

Native Americans had several uses for the wild leek. It was used to treat coughs and colds and a poultice was made from the bulbs to treat bee stings. The Menomini tribe of the Lake Michigan area called the wild leek pikwute sikakushia, or skunk plant and the area where it grew shikako, or skunk place. The name was later applied to the white colonial settlement now known as Chicago.